(Warning: Because it has the most graphics, this page may take a minute or two to load on dial-up.) 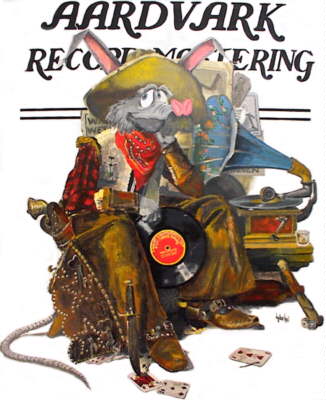 When I was in High School, I had fun doing T-Shirts and signs for local folks and eventually thought I would go to work as an animator for Disney Studios. Over time, shake-ups in original management plus my own limitations at working in a production environment made me realize that those ambitions were not realistic, so I basically just noodle around with the occasional art project for any friends who might be able to use it.
The above piece on the left was part of a stab at a  sign business that Mike Tryhorn and I tried to launch in '79. It is rear-airbrushed at 5 X 7 feet and rear lit with neon tubes, designed to be used as a sign for a local pinball-video arcade. Mike built the display cabinet and wired all the electricity. The arcade has since gone out of business and I couldn't tell you if this sign exists anymore. The painting on the right was a full canvass in outdoor house enamels that I copied from Rockwell's "Days of Long Ago" substituting Paul's Aardvark in the place of the trail-weary cowpoke. Took about six months.

Mike and I with the finished product

These were panels that formed the perimeter of the canopy covering a children's carousel. Original panels were made from pressboard and deteriorated quickly with age and weather.Panels were re-shot in fiberglass and custom fit. Sports scenes with animals were depicted. The original German artist had the animals looking vapid and innoccuous, so I put some North American cartoon embellishment on my re-creations.

Large facade canopy panels on the "Himalaya" suffered from the same pressboard weather-beating so they were also re-shot in fiberglass. I opted to stick closer to the original artwork on this ride.

Due to Paul's former affiliation with The League of American Wheelmen as their National Treasurer, I created these posters for the '02 and '03 National Conventions in Denver, CO and Elgin, IL.

More cartoons are at both Rover Cleveland.com and the Aardvark Mastering Home Page including Animation.

"No one in the History of Music, ever asked a drummer to play louder."
-Steve Allen

My association with music is what I casually refer to as "The Idiot and The Odyssey". It started with Mitch Miller, Anne Lloyd and The Sandpipers on "Little Golden Records". During school, my folks thought I should try the violin and play for the orchestras, but the whole thing got sidetracked in the basement of our grammar school where the orchestra used to rehearse when a kid came in with a pair of drumsticks and a practice pad. I kept sawin' away at the fiddle but my mind was clearly matriculating in the drum section. About 1964, my parents grudgingly acquiesced and purchased my first snare drum for me. To appease them for a couple of Summers, I continued on the violin attending Music Camp but always with my drums in tow. I continued to rankle feathers because I wanted to get involved with the camp's 'stage band' ensemble while  playing in the orchestra. Seems like I always incurred the wrath of other drummers when I tried to participate in community jazz ensembles so I gave it up in favor of the more accessible rock-n'-roll. Eventually, I was even able to put together a 9 piece jazz-rock group before I got out of school. But it was all short lived and I barely had time to play while in J.C. . About that time, I auditioned for my first community theater group playing utility fill-ins and occasionally sitting in the drum chair for the orchestra  when needed, but acting was pretty much where I have stayed ever since.

When we were all in High School, The Great Jon Kurnick fronted Blue Coral and Northe Acropolis. I wasn't singing back then so Jon also took the lead vocal duties. In 50+ years I never ran across a finer musician.

The  two groups pictured below, represented my last working gigs in Orange County.

This is the last band that I fronted in Anaheim  (1981) playing old Rock-'N'-Roll and Country. With me are Left to Right Chuck E. Cheese (bass), Yours Truly (drums and lead vocal), Las Vegas Timmy (Piano and Vocals) and my buddy Michael Tryhorn (lead guitar).

At Dennis's (circa 1998) playing and singing in an
impromptu jam session with one of Gene Autry's
original sidemen, Buck Page.
Buck played lead guitar and sang with the original
"Riders of the Purple Sage".

On the bridge of the Enterprise-D.

Since coming back to Denver, I've had the good fortune to be situated in the midst of talented neighbors. Across the street from me is an artist who in my opinion can paint with great feeling. May is a respected icon of the local Art denizens and has frequent showings which you can usually access info to by visiting the May Trumble Studio online. Below is "Into The Eye of The Needle", just one example of a noble and delicate style.

Into the Eye of The Needle

All the photos in Huis Ten Bosch were mostly done by tourists as gifts and Nagasaki Holland Village.

Lowell Noel, comfirmer in Denver's telemarketing department, helped ring in "Christmas in February" on KDVR Channel 31 television. Lowell portrayed Santa Claus on 12 hours of daytime TV and lavished gifts upon hundreds of children in the metro area. Lowell's art of portrayal is not a "passing fancy" (say that three times), he has been acting over 16 years. His credits include leading roles in the theatrical productions of "A Funny Thing Happened On The Way To The Forum," "Something's Afoot," "The Matchmaker," "Fiddler On The Roof," and countless others. An extremely talented individual in many artistic fields, Lowell at one time conducted radio interviews on California's KACY with such recognized celebrities as Doc Severinsen, Buddy Rich and Dennis Weaver. His film and television credits include appearances in "Walking Tall," "All The Marbles," "Rocky III," "The Seduction," and "South Of The Border." In addition to his stage and screen contributions, Lowell currently is an illustrator and cartoonist and hopes someday to open an animation studio. An avid '50's and '60's rock-n-roll fan, he has been a disc jockey at two Denver oldies clubs for the past year. Since November, Lowell has been on center stage at the Country Dinner Playhouse in the musical production of "Seven Brides for Seven Brothers." Break a leg, Santa!