Doors Open Denver running April 14~ 15 2012, was the last chance to see the Lady in her original state, part of this free event before interior work begins. Took a few snaps of the existing interior as follows--

(L) The Stage Right Upper Tier of Boxes (R) The Main Stage taken from the Left Aisle of The Mezzanine-- About 25 ft. Vertically From Apron to Proscenium

These posters were left out in the weather for God Knows how long in the Entrance Portico of the Elitch Theater. Left is Helen Trenholme hand-painted in the fashion of the Original Cast Displays. Right is Vincent Price as Oscar Wilde which, for all I know, hadn't been moved since the show played in 1979. It IS autographed reading "I Love Elitch's. Sincerely Vincent Price". I shot these when I came back to town in 2004. The following year, outside restoration began.

The Elitch Gardens Theater which was founded in 1891 making it one of the oldest theaters in America and PROBABLY the oldest wooden gazebo theater still standing.

The Elitch Theater Company was at one time, one of the FIVE top Theatre Troupes in American Repertory.

Edward G. Robinson was fired from a Season for being a sloppy dresser.

Belle, Helen and May Bonfils were ALL Actresses in this Company and developed most of the major theaters in this area including establishing a trust which operates all theaters in the Denver Center for the Performing Arts.

In the mid-twenties, there was a C. DeMille listed in the Acting Company for Summer Rep.

While on the net, a warning will come up (in XP) saying that your computer is infected. A display of your harddrives then comes up showing many Trojan viruses and claiming to be Windows Security. Then it will ask you to download InstallSecurity606.exe This is nothing but a VIRUS installer. Watch out!

Paul Brekus, of Denver, rides home from work on his penny-farthing replica bicycle last week along Court Place
in Denver. Brekus’s penny-farthing has a 60-inch front wheel. This year, he completed his goal of cycling the equivalent
of the Earth's circumference on a penny-farthing.

Denver resident Paul Brekus has been around the world, or at least the equivalent of it. In January, Brekus reached his goal of riding 24,901.55 miles - the Earth's circumference at the equator - on one replica penny-farthing, which has a 58-inch front wheel. "That's a lot of miles, especially to get out of a reproduction bike," said Golden resident Steve Stevens, who also rides penny-farthings.

Brekus, an associate information technology systems administrator for the Denver Civil Service Commission, said many people have gotten to know him simply as the "guy on the big bike." He rides 12.5 miles round-trip from the Berkeley neighborhood to work most days and is often seen on some of his favorite trails, such as Cherry Creek and Lakewood Gulch. Brekus said people usually ask him two questions: "How do you get on that thing? How do you get off that thing?" To get on, he jogs with the bicycle, puts his left foot on a back peg, climbs into the saddle and starts pedaling. Getting down is essentially the same process in reverse. "Takes about 10 minutes to learn how to get up and down," Brekus said.

The penny-farthing, which also is known as the ordinary or the high wheeler, is a type of bicycle with a dominant front wheel that was popular in the late 1800s. It is named for two British coins, with contrasting sizes. Brekus, who is national treasurer for The Wheelmen nonprofit organization, now rides a replica penny-farthing with a 60-inch front wheel. He keeps a vintage 56-inch bike on display at Salvagetti Bicycle Workshop. His wife, Barbara, rides a vintage safety bicycle, and his stepson rides penny-farthings.

Brekus isn't the first Denver resident to be associated with a high wheeler. In the 1890s, Denverite Horace G. Kennedy won a number of races and performed as a trick rider on the Orpheum vaudeville circuit. In a 1957 article in The Denver Post Empire Magazine, Kennedy's grandson, William Barker, described Kennedy as "easily the most dashing celebrity in the Denver of the 1890's ... a lean, lithe sort with a devil-may-care style." About five years ago, Brekus said, he was riding a penny-farthing when someone offered to sell him original photographs of Kennedy performing tricks on one. Stevens, who runs the Golden Oldy Cyclery museum at his home, purchased them for display at his open houses.

Brekus had been an avid cyclist and antique collector for about 20 years before merging the two interests. For about 25 years, he has run Aardvark Record Mastering, cutting vinyl masters for musicians and comedians. He kept his handlebar mustache, which he attributes to his interest in baseball, after he started riding replica bikes. "It's aerodynamic," he said. Brekus, 56, has been riding high-wheel bikes for more than a decade.

In 2000, he joined Stevens on the Wyoming leg of Stevens' cross-country ride on a penny-farthing. Brekus' wheel came apart, and he crashed, suffering a severe concussion and knocking out two teeth. "I didn't know who I was for a week," Brekus said.
He said he kept riding because he didn't remember the crash, and he wanted to get "back on the horse." Now, he plans to travel across the U.S. when he retires at 65. He said: "First thing I plan to do once I retire is get on the bike and go cross country."

On March 22, 2011 I tried a Grand Experiment with an idea I'd had about 6 years prior for a possible Comedy Sketch series which I tested at the local Comedy Works here in Downtown Denver.

...in 1975 to be exact, I decided to attend an institution of "higher learning". Instead of taking the wise course to research suitable academic surroundings for someone of my questionable grade point average, I decided to buy into the hype about Oral Roberts University with the faint hope that a degree from a "christian" school would carry a measure of clout. While my aspirations were not entirely realized, I did meet a good number of interesting folks, some of whom went on to become minor celebrities in both worlds of secular and spiritual. By far the most valuable find was a tall skinny fellow (actually compared to me, most OAK TREES are skinny); who was sitting in my Math class tinkering with what appeared to be a lead screw crank from a Presto 6N disc cutter. "Where'd ya' find the Presto crank?" sez I, and he stares at me amazed that someone ELSE knows what it is, (16 inch turntables and cutters in good shape are normally part of mastering labs or museums). We struck up a fast conversation and shared disappointments about the ability of the institution to fulfill our academic career goals. Even though we physically appeared to be a living embodiment of Stan and Ollie, we had much in common regarding our respective outlooks, our taste in film and entertainment and our technical ideas about how matters of electronic transcription and recording (both video and audio) should be accomplished. To say the least, it differed greatly from the attempted curriculum. For whatever reason that only the fates know, a nice relationship blossomed. I was fortunate for many reasons not the least of which was Paul's proficiency with electronics. Among other woes, we could never seem to get school studio time to do radio projects or our own unique audio show titled "The Aardvark Hour". Paul was fed up enough to make a trip to Radio Shack and after about a week, had turned our dorm room into the studio pictured above. While I was a reporter on the school paper, it was unique enough (the ONLY such one in the dorm) to do a story on and got me front page with "by" line (hence, the taking of the photo). It wasn't long before the other kids heard about it and I would say that he and I probably spent more time helping them with their projects than completing our own. Paul was a whiz fixing broken stereos and record players. I was mostly on the writing and announcing end scratching out artwork here and there and as our reputation grew, there emerged an interesting twist of the fates. It seems that one day an expensive Ampex AG-440 had been somehow spirited away from the main production studio. Out of some 200 students majoring in Broadcast, the FIRST place they searched was our tiny dorm studio (assuming of course that we had sewn it into the lining of one of my suits).

At the time Paul had dreamed of owning a Scully lathe system which seemed about as far away as the pictures in the catalogs we would look at. I wasn't sure where I would channel my energies but it was Paul who helped that decision along as well. Nowadays, Paul has THREE Scullys plus a "portable" Neumann, performing repairs for jukeboxes and antique phonographs as well as Edison cylinder machines plus tending the Denver Civil Service computer network. I have seen more antique players, (35 & 16mm) film projectors, jukeboxes and Edison recordings come through Paul's care than I will probably ever see in Menlo Park. It is my considered opinion to this day that since 1975, I have met no one better at this craft than Paul Brekus. Lord knows I've tried to be somewhat fruitful in my own endeavors but the plain fact of the matter is that I wouldn't have been anywhere without him. 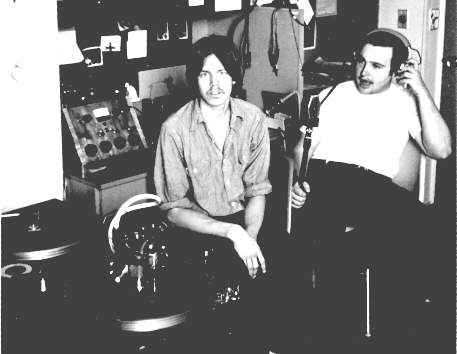 A tribute to Johnny Carson

More scum will be added as I find it.

To those who just MUST have their Cel-Phones with them when they go see a movie:

There are people sitting BEHIND you. If, after the lights go down, you cannot go 2 minutes without checking the thing for whatever, show some courtesy and either sit all the way to the rear or go out in the lobby.

When the show starts, NOBODY wants to see the light from your phone display.
It is DISTRACTING, RUDE and IGNORANT.

"The First Dog On The Left" has arrived!

The Collected works of Andrea Brekus

Randall Designs:
An old friend who's one of the best in his field

Snopes.com - NEVER open any E-Mail attachment you're not sure of, it's your first defense against computer viruses. If you're curious about how they may be titled in the subject line, these reference sites will clue you in. Also, before you respond or forward  some bogus E-Mail rumors, bookmark the above as well as George Carlin's own web page.